This was a warm up gig for Dan Le Sac vs Scroobius Pip before they hit the big stage with Frank Turner & Billy Bragg at Wembley Arena. The support act I caught, (I believe there were two but we missed the first) were Cardiff based big funk and hip hop band Afro Cluster. You can check out what they are up to on their facebook page or have a listen on  soundcloud.

The gig was a sell out and we fortunately spotted it early and my mate bought us tickets well in advance – good shout. As they have not been to Cardiff for quite some time, they decided us good old Cardiffians deserved a bit of Le Sac vs Pip love. It is always hard to describe the sound and I think they do have something pretty fresh and unique going on. My best attempt when quizzed was they are a kind of hip-hop, funk, rap, electro duo from somewhere near London. I was impressed with their first album Angles which was a random buy from Spillers Records. I only listened to the second album The Logic of Chance, the week before the gig, but it is growing on me now – the music is sharp and tasty. 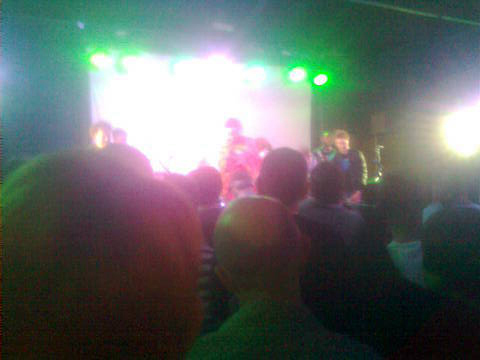 This is Afro Cluster – they had around 6 members with a cool array of sounds and instruments. I like the sound and it was a cool funky intro to the main act. This is where the one gig photo experiment goes all wrong, but as said in my first gig review blog post this is an experiment and they don’t always go right – ops. 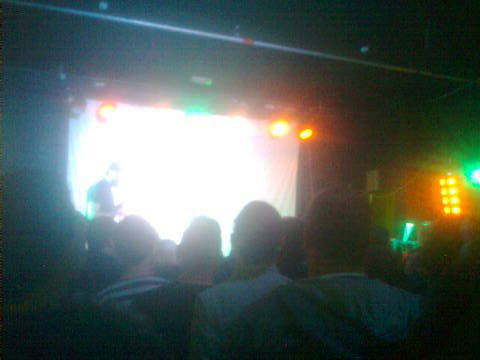 Dan Le Sac and Scroobius Pip arrived on stage both with impressive beards. It was as soon as Scroobius Pip started to speak you got the strange feeling – I have heard this so much how can this be a real person not just a record. His voice is super distinctive and I have been told he did a voiceover for something we hear often, like an ad or computer game but I still can’t figure out what. Does anyone know? Help, this is bugging me now!

The stage looked quite empty with Dan Le Sac off to the right with his DJ decks but soon the songs and banter filled in the space. The tunes are good for dancing and good for singing/rapping/talking along too if you know the words. Iconic songs such as The Beat That My Heart Skipped and Get Better got everybody shouting and joining in. It was a great atmosphere, I love it when the crowd obviously are digging it, it always makes for a great show. I hope they tour again soon or do the summer festival circuit as now I have listened to the second album, I can’t wait to boogie and speak along to the tunes.

Dan Le Sac vs Scroobius Pip with support from Afro Cluster played at The Globe in Cardiff on Thursday 12th April 2012.