I really enjoy making Christmas cards, you can be creative and then refine it by making a whole batch. I like to make each card have a slightly different design and be unique for the person I have made them for.

Christmas cards became popular with the introduction of the uniform penny post in the UK in 1840 and the first commercially printed cards being printed by a man named John Calcott Horsley for Sir Henry Cole in 1843. But Christmas Cards can be traced back to 15th century Germany and were made by hand by skilled craftsmen. As a fan of print and craft, I love seeing how it all began and processes such as woodcuts and lithography evolved. But is always nice to receive something hand-made. I think I will always make cards, be it for birthdays, Christmas or just to spice up a letter.

This year my theme was snow bees. I thought it was a magical idea for bees to be flying around in the snow. After researching I found out bees do come out in the snow to stretch their wings. These are called cleansing flights and are very important for the hive to remain healthy. A cool fact about bees is that they keep warm by shivering and huddling just like penguins do. They rotate from the inner huddle to the outer layer and many are sacrificed in the cold for the survival of the swarm. There is also a Lithuanian Ski Team called the Snow Bees.

The equipment I used for making the cards were random things I found around my house, as follows:

The special crafty item that gave me the idea was a flower press. I bought it in a charity shop at the other side of the UK, while visiting my sister. I love the idea that someone carefully pressed these beautiful flowers, which then travelled hundreds of miles home with me to then got sent back around the country. I am looking forward to pressing my own flowers and plants – perfect crafting supplies. 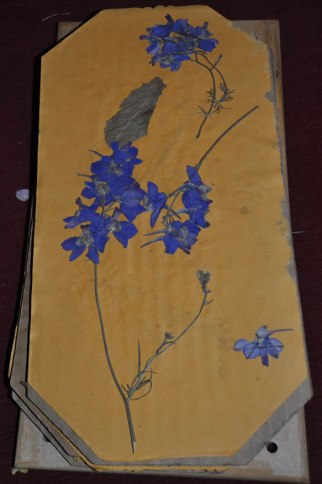 I then spent ages drawing silly bees, I gave them daft faces and personalities. I made some especially for certain people, like the one with a moustache for my niece. She also got a cat with a moustache for her present. I cut them all out and then the sticking, glueing and glittering began.

I made batches of wings from the lacy material and snow balls from the cotton wool. I then stuck all the pieces on the folded card with glitter sprinkles on the wings. The final touch was adding the silly festive message “Bee wish you a Merry Christmas”, with gold and silver pens. The insides of the cards also had silly witty bee related messages such as “Hive a Merry Christmas & Buzzing New Year”. It got quite silly and giggly in my house at card making time.

I made over 40 cards in total so it was a long but fun process while listening to music and talking. Sticking the pressed flowers on the card was the trickiest part, I tried both white PVA glue and spray glue. The PVA was most successful as the spray glue didn’t dry properly and some people had sticky cards that had to be unstuck from the envelope. I did have some people telling me they thought this might have been on purpose and smelled the cards to see if they still could smell the flowers or I had put a small amount of honey on them. In hindsight I really should have sprayed or added a scent to the cards, what a great idea, nice smelling cards. Maybe next year.

This design above had a worried bee thinking the festive greeting, while others shouted the message with kissy lips as below. It was a hard task deciding who to give each card to but they eventually all got written a day or two before the last posting day. I bought brightly coloured envelopes for them and off the bees went. 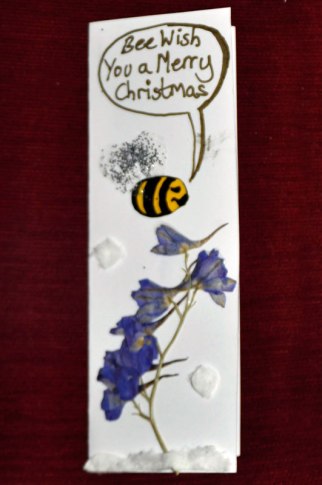 Thanks for reading. Anyone else hand-made Christmas Cards last year? It would be nice to hear about them.