On the streets of Vietnam over two and a half months I photographed, translated and considered the public information posters and billboards I saw. They are fascinating, intriguing and communicate a wide variety of fine points about the Vietnamese people, culture and government. As a nominally communist country the deep history and use of propaganda is not only found in the fine art museums but in every walk of life. I can only think of Vietnam now as unique and after two visits to this wonderful country, my previous ideas of a communist country have been smashed by the reality of ‘Market Socialism’. The phrase ‘every man for himself’ comes to mind when witnessing the Vietnamese passion for money-making, and stands contrary to a true, honest welcome and generous friendships I will treasure for life. This great country is contrasting, extreme and worth every tear and effort I put in, for what I took away.

Maybe I should start from the beginning of how I discovered this strange soup of art and politics. I am an observer but I cannot observe without understanding what I see. The first town we stopped in on our trip from Laos to Vietnam was Kontum, a small town in the central Vietnamese highlands. The speed of driving, mainly motorbikes, had increased, horns hooted but everyone wore a helmet (they really don’t bother that much in Thailand or Laos). It was busy, bright and bold and posters for events, advertisements and signage were everywhere. We could attempt to read everything due to the same alphabet being used as English and so, our self-imposed Vietnamese lessons began.

I have translated the text myself and double-checked it is correct by a first language Vietnamese friend. I will do this with all examples in this post under each image.

Drug use is suicidal

The above poster caught my eye the very first day in Vietnam. It is striking and has a subject matter and horror style I can’t ignore. I love the macabre and this really got me hooked. It is a poster to educate very dramatically the evils of drugs and to deter people from taking them. The simple block illustration is bold with a dramatic colour scheme, the text capitalalised and blocky apart from the stylised ‘MA TUY’ which means drugs and is quite unique to this poster.

On country roads and streets of the villages, towns and cities, I saw a huge variety of examples. The posters mostly still hold on to the traditional style that many communist countries adopted and seeing them from a Westerners eyes, Russia, China and Cuba is brought to the front of the mind. The use of bold typefaces, block colours and simple illustration is dramatic and often feels like it is shouting the information at you. 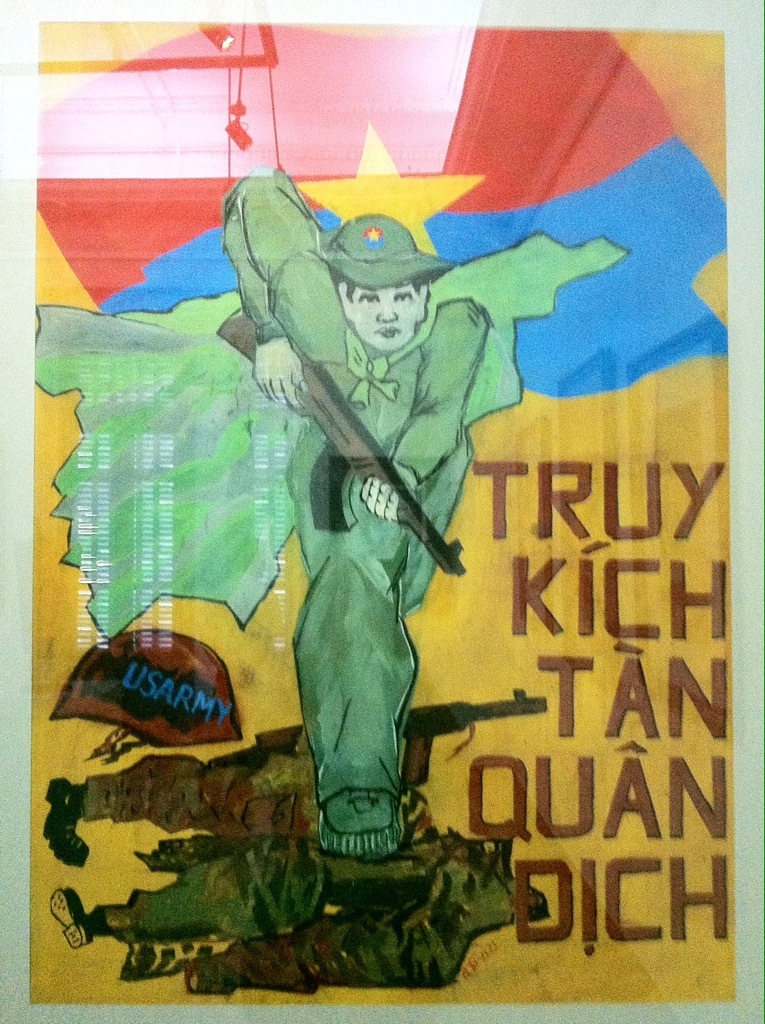 Pursue the enemy to the end.

My visit to the Fine Art Museum in HCMC (Ho Chi Minh City) showed me the history leading to the modern posters. The poster above uses strong bold imagery, flags, capital bold block text and a simple primary colour palette. Revolution, war, army, guns, violence are depicted with power and strength, from the colours to the stance of the solider rushing forward. To fight and push on forwards with honour is a key message. The simple hand-drawn typeface is a standard feature, which I have seen used time and time again. Functional and for purpose can be said to be a graphic designer’s guiding principle, and these posters never stray from this attitude. 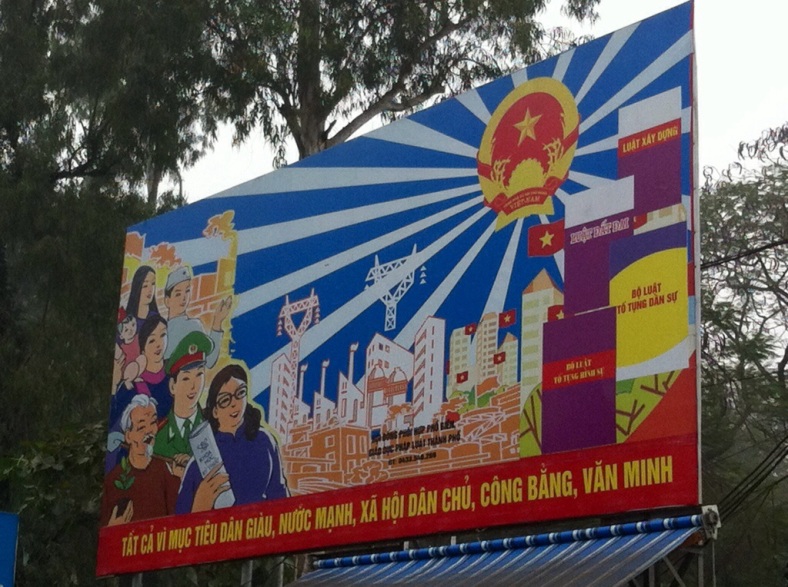 All for a prosperous people, strong country, democratic, fair, and civilized society.

This poster contains many of another common set of elements, these include; stripy circular burst backgrounds, simple illustrated people from waist up, city buildings, yellow star on red background from the Vietnamese flag and numerous repeating flags, just as you see in everyday life in Vietnam. The only main element missing here is the soviet/communist hammer and sickle. National identity is an intense feeling that gives people roots, walking past this kind of imagery everyday must subsconsciously strengthen the feeling of belonging for many. Repeating the same thing over and over until it is ingrained is part of the intended success and impact of these posters. 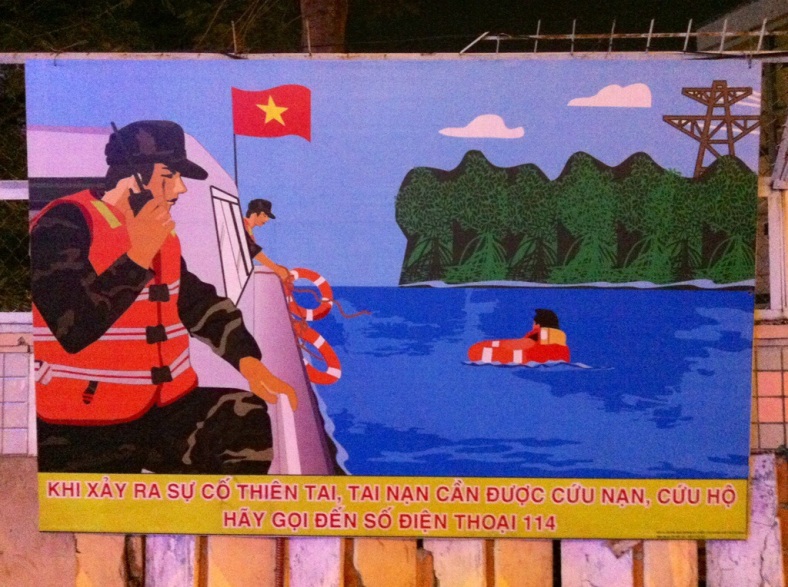 In cases of natural disaster or accident emergency in need of rescue, call 144.

The above is a direct message for water safety and the main point includes a number to call for the emergency services. This was located near the large rivers and ports of HCMC. Can this be called a propaganda poster? I think not, it is purely information but due to the visual style it falls into this category for a non-Vietnamese speaker. This is the clear strategy of the government, blur the lines between fact and propaganda and people will casually absorb and believe. Use the same style for moral guidance as for safety, law or information and the two become one. A clever brand, be it Coca-Cola or Oxfam uses this suggestive method mixing needs and desires, there is no doubt it works and achieves the implementers’ required outcome.

My visit coincided with ‘Tet’, the Vietnamese Lunar New Year. It is the biggest celebration of the year and everyday life changes for weeks before and after. I can only describe it as our New Year, Christmas and Easter all merged into one. It is a big deal, the above poster mentions this celebration on the far right and it seems to coincide with newly-elected district congresses. You can see the yellow Tet flowers brightening up the poster and the year of the horse celebrated with joyful invigorating imagery. The typeface is also different on this section, it is an ornate script font in gold suggesting humanity, luck and money. These are all aspects celebrated at new year.

The most famous face in Vietnam makes his blog debut here, Ho Chi Minh, or more fondly Uncle Ho, just two of his many names. If you set foot in Vietnam he will always be with you, the father of communist Vietnam, the man who kicked out the French and fought the USA, the man in whose name the history books are all written here. His face is on all the notes (they don’t have coins), on public posters, in people’s homes, cafés, street graffiti and you can even go and see the (embalmed) man himself, frozen for eternity in the Ho Chi Minh mausouleum in the capital Hanoi.

The other three sections of this epic display (about 10m wide by 1.5m high) are true to the Vietnamese propaganda and information posters. Bold, dramatic and powerful with block capital text, primary colours, strong block colour illustrations of people and buildings, the yellow star, the hammer and sickle all with one bold message each. A glance while driving by or a momentary read of one panel still communicate the message loud and clear. 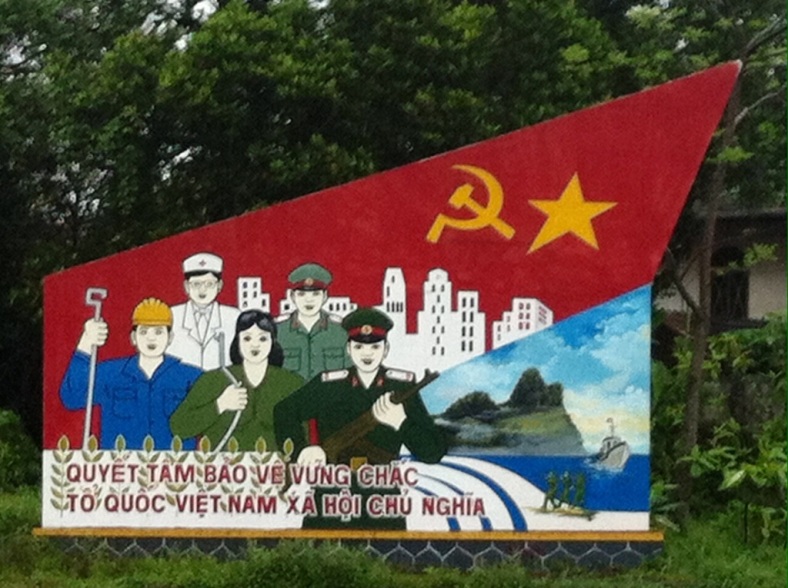 Determined to strongly protect our Motherland of Socialist Vietnam.

This billboard stood out from the crowd as it was hand-painted and had a dynamic spiky shape. I saw this one just before a bridge in Hue, the ancient capital city, but away from the tourist centre. Most of these information posters and billboards are not too ‘in your face’ if you stay on the tourist routes but our adventures took us far away from the regular backpacker haunts so we saw vast amounts of them. I love the thought that this was earnestly made by the hand of a party ‘true believer’. The spirit, passion and togetherness of Vietnam is wonderful and I think a positive aspect of the country.

Signing up for health insurance means protecting your family, community, and society’s health.

A much simpler and smaller poster which caught my eye in HCMC, maybe due to it using imagery of only females and being pink is another direct message rather than moral guidance. It reminds people to sign up for health insurance and therefore I speculate this results in free or reduced rate healthcare. While talking to some Vietnamese students in Hue we did have to explain about the NHS in the UK, they could not believe it was free and asked many questions. This conversation did make me aware that in Vietnam if someone is seriously ill it is very expensive. The family unit is very important in Vietnam and take responsibility if people were in need, as there is little in the way of social safety net.  This was a big surprise to us as the full title of the country is ‘The Socialist Republic of Vietnam’.

Emulating to create achievements celebrating the founding anniversary of the Vietnamese Communist Party.

Hidden in the shade of a tree-lined street, outside the Ho Chi Minh Museum in Hanoi, I saw the bold billboard above. I felt that the colour scheme was more sophisticated and appropriate to its surroundings than many other examples, the autumnal colours were rich and warm. The bold simple message clearly delivered its aim to reinforce for the local and visiting population the idea of camaraderie in the Communist Party of Vietnam, especially outside of the founder’s museum and mausoleum.

This very classic poster has a touch more depth to the background. Maybe a new artist had been taken on in the government department that produces them. The people look like they are from a comic book and the star is stylised. The use of computers to produce the poster has perhaps given the designer more flexibility with transparency settings and layers. You can see transparency gives it an abstract depth but the rest of the style reminds more or less the same since Vietnam was liberated from France in 1954.

Vietnam as I see it has a countrywide brand, a very well-developed, strong consistent one for the last 60 years. There is no doubt in my mind that a strong, unified style has reflected (and maybe helped its development) as a strong, unified nation. The many tourist-aimed propaganda poster shops proudly sell examples which are bought by the truck load, taking this defined artwork to a global often young audience purely for their aesthetic value.

I am not writing this post to discuss if it is right or wrong to mix information and propaganda messages. I believe in free speech which is not entirely allowed in Vietnam and I have now heard first hand by citizens say “this is for the good of the country”. As the red phone box, Big Ben and the London Underground graphics give the UK a brand worldwide, I think the information and propaganda posters of modern day and at least the last 60 years help define Vietnam’s view of itself, and the world’s view on Vietnam. Truly something to be proud of for the artists, designers and propaganda departments involved now and yesteryear in this magical beautiful country.

Do you see this as a nation brand or just a historic style that has come together by chance? Have you been to Vietnam and been engrossed by the posters on the streets? I would love to hear your thoughts on this provocative way the government communicates with its people now and in the past.

You can read my co-written blog The Vagabond Tribune with stories of all my travel adventures, Vietnamese adventures coming soon.

One thought on “Vietnam streets & the art of propaganda”